Bali ? No. It is not. As mentioned earlier, Indonesia has a lot to offer to you, beach lovers. There are many places in the archipelago that can offer similar things to Bali Island. White sand, clean and unpolluted water, and amazing landscape. The above view is from Saronde Island.

Its name has not been as famous as the God’s Island, Bali. Also, it has not had the same fame as Maratua Island. But, definitely it has the same quality as both, in term of attractive beach.

Saronde Island is located in northern side of Sulawesi (or Celebes) Island. It is under administration of Gorontalo Province. It is not big sized island as if its periphery is only 1 Km. Quite small.

However, the island should be considered to be put in itinerary of any beach, snorkeling, or diving maniacs. It has very clean water as it’s separated from Sulawesi mainland. No pollution so far has ruined the surrounding water.

It has also very limpid yet dazzling white beaches. All combined with the blue sky will make many photographers prancing around with joy. Beautiful and amazing.

The Saronde Island can be reached quite easily. It is located around 30 minutes by boat from Kwandang Harbour. Meantime, the distance between the harbour and Gorontalo Airport is around 60-65 Kilometer or 1.5 hour driving.

Not too far to see such beauty.

There are also cottages in the island for the ones who want to stay longer. The fare to rent the cottages are also reachable.

What to do in Saronde Island? Well, you can set up a tent near the beach, with bonfire at the night. Doing diving, snorkeling, swimming in the morning. It would be fun.

Probably, if you haven’t prepared your schedule of visiting Indonesia, the Saronde Island should be at least considered to be one of your destination.

Really nice view, isn’t it? Those pictures were not shot by a pro photographer.

Note : Thanks to my friend, Dewi Herlinda. I know that you are not a pro but the pictures are amazing. Definitely. 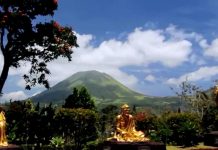