Angklung is a kind of traditional musical instrument which only exists in Indonesia. This musical instrument is made of bamboo shaft which is whittled and carved carefully and preciselyin such a way that if it is shaken, it produces a certain tone.

Therefore, angklung is usually played in a group where each member will hold one angklung with a certain tone only.

How to use is by shaking several times (like everyone do with handbell) according to the song notes. Sometimes, all are simultaneously shaken, but more often in turn.

This musical instrument is usually used in formal occasions or celebrations.

Origin of Angklung itself has many versions and each region has its own story. Nevertheless officially angklung allegedly came from the region in the western part of the island of Java which now consists of two provinces, West Java and Banten where the ethnic Sundanese settled.

Will This Scarecrow From Ciamis, Indonesia Scare Birds? 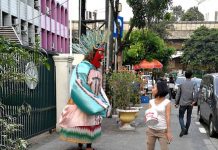 Pedestrians Must Cross Streets On Pedestrian Crossing But What Should They...