Klara beach is a name of one tourist destination in Lampung Province. It is located around 1 hour driving from Bandar Lampung, the Capital of the province.

You may never hear the name before . It is fully understandable considering Lampung is not known as a favorite place for people looking for leisure. The southern province in Sumatera Island is known better as the producer of cassava.

So, it is forgiven if you don’t know about the Klara Beach.

However, please just look at the picture taken by my son few months ago. There is a reason why I chose this photo as the featured photo for Talking Indonesia. It’s so blue and wonderful, especially with hills as a background.

It may not be as famous as Kuta Beach in Bali but how it looks is similar. The beach has the same ingredients that are always sought by beach lovers.Clean water. Beautiful landscape.

What is needed is just more accommodation and promotion to make it another interesting place to see in Indonesia.

This is another picture captured from the beach. The name of Klara Beach do not come after someone’s name. It may sound as a female’s name but in fact, it is not. The “Klara” is originated from coconut trees that are quite dense in the area.

Klara is an abbreviation from “Klapa (Kelapa) Rapat” or in English “Plenty / Coconut Trees”. This refers to the condition in beach itself on which coconut trees are so dense.

So far, Klara Beach is quite famous among people in Lampung. The beach, especially on holiday season” are always full with visitors.

People coming here usually do what beach lovers do. Playing water, building sand castle, riding banana boat and enjoying beautiful landscape. Most of the visitors are from Bandar Lampung and some other cities in the province.

However, this won’t be suitable if you are a surfer, the beach is within a cape facing Sunda Straits. There is not enough wave in the lace.

It may not have the same fame as beaches in Bali but it has similar quality, in term of what beaches can provide to the visitors. You should consider to spare some of your time, if you come to Lampung. Klara Beach is another one nice place this archipelago can offer. 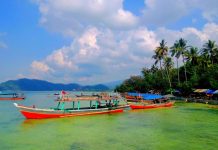 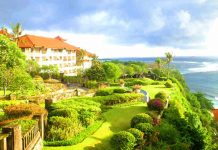